Wes and Abi take on the Himalayas for Woodlands

A courageous couple recently took on a mammoth 15-day walking trek in the Himalayas to raise money for Woodlands Hospice.

Supported by just a guide and a local Sherpa, Wes and Abi Simmons reached the Base Camp of the world’s highest mountain, Mount Everest, back in September. Yesterday they managed to make the slightly shorter journey from nearby West Derby to tell us their story:

“Abi’s mum, Jean, passed away in 2016 and was superbly cared for, so we wanted to do something in her memory that would help to support the wonderful work the hospice does on a daily basis. We wanted a once-in-a-lifetime experience, as we are both quite adventurous,” explained Wes.

Arriving in Kathmandu in early September, the daredevil duo then took a short flight to nearby Lukla, which is known as one of the most dangerous airports in the world. Surrounded by huge mountains at an altitude of over 2,800 metres, and with a runway just 460 metres long, the ‘descent’ into Lukla is rightly regarded as a white knuckle ride by many of those who undertake the 30 minute flight.

After landing safely, the couple then began the arduous trek to Everest Base Camp, which took nine days to complete:

“It was physically very challenging,” said Wes. “We were climbing to an altitude of over 5,000 metres so altitude sickness was an issue. We camped each night and often struggled to sleep due to the lack of oxygen in the air. Sometimes even tying my shoelaces was hard work!”

“Once we eventually reached our goal, we tied a prayer flag and took some pictures with our specially made flag, made in memory of Jean. It was an inspirational achievement and one we will remember for the rest of our lives.”

“We hope it will encourage others to take on challenges in aid of Woodlands, either to remember loved ones or just to raise money for such a worthy cause.” 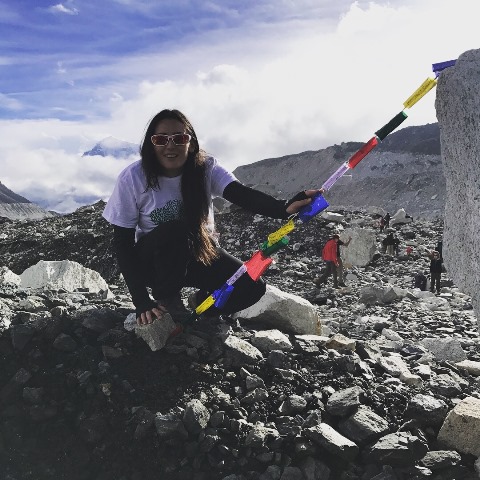 Abi left a prayer flag in memory of her mum, Jean

Wes and Abi’s Himalayan adventure has so far raised almost £3,000 and they are still collecting donations from friends and family.

If you would like to make a contribution please visit their Just Giving page at:

Carole Riley, Individual Giving Manager for Woodlands Hospice, was full of praise for the couple’s achievements. She said:  “I would like to thank Wes and Abi for the extraordinary lengths they went to in supporting us.”

“Not only have they raised a phenomenal amount of money, they have taken on and conquered an extremely tough challenge – they really have gone beyond the call of duty in helping us and we are incredibly grateful.”

If you are inspired by Wes and Abi’s story and are interested in taking on a challenge in aid of Woodlands, please contact Carole Riley on 0151 529 4143 or at carole.riley@aintree.nhs.uk