“One Life Lived, Many Lives Touched”

‘One Life Lived, Many Lives Touched,’ was the quote used by the Edwards family to describe Mark - a much loved husband, father, son and friend.  Mark Edwards sadly passed away in August 2017 at Woodlands Hospice, however, the impact this amazing man had on so many people’s lives has been clear to everyone at the Hospice who had the pleasure of meeting him and his family.

Mark’s wife Anna, shared her experience of Woodlands and how the Hospice supported them, their three daughters Beth, Ally and Tori, Mark’s Mum, Barbara and Step-Father, Phil through this difficult time.

“The first time we heard of Woodlands Hospice was when Mark was receiving care at Aintree University Hospital. We were interested in finding some support for our three daughters and the nurses at the hospital recommended the Family Support Team at Woodlands. One of the nurses, who had been brilliant throughout Mark’s care, also suggested Mark might feel more comfortable at the Hospice, but we were apprehensive.”

Initially, the word ‘Hospice’ seemed like such a frightening word to the family, however, Anna visited Woodlands and was surprised by what she found.

“I remember thinking it was more like a garden centre than a Hospice! It was relaxed and a much nicer environment than I’d expected and we realised that Mark would feel more comfortable there than he would on a hospital ward. When Mark was transferred to Woodlands, it also helped to know that his room was becoming available because someone was actually leaving to go home and that we had that option if we wanted it.”

“The entire family just relaxed straight away at Woodlands, the girls had found it too distressing to visit Mark on the ward but they actually enjoyed coming to the Hospice. They looked forward to seeing Elaine and Jan in the Family Support Team and would play in the gardens.”

“Barbara and I also stayed with Mark around the clock, which isn’t something we’d have been able to do in a hospital. One night when I stayed over, I remember a lovely nurse lowered Mark’s bed next to my camp bed, so it was as though we were back in a double bed at home watching T.V together. We were also able to celebrate our eldest daughter’s, 13th birthday as a family and still make the day special for her, despite Mark being quite poorly at the time. It’s moments like that which we really cherish now.”

Following Mark’s passing, Anna set up a JustGiving page in his memory, with all donations being given to Woodlands. Donations poured in from those who Mark had touched during his life, raising over an incredible £20,000 in a matter of a few short weeks, going some way to show the impact he had on so many people. Beautiful words and tributes were also left on the page from those who’d known Mark, which helped bring some comfort to the Edwards family.

“We used to live in Hong Kong and when we held Mark’s funeral, our friends out there held a service simultaneously for Mark at the Cricket Club he used to go to. They have also invited us out for a charity match that they are holding in memory of Mark with all his old Cricket and Rugby team mates and plan to get a Memorial Bell and name it after Mark. It’s just lovely how generous and thoughtful everyone has been.”

Anna and her family have also decided to support Woodlands Hospice’s 2017 Light Up a Life Appeal. 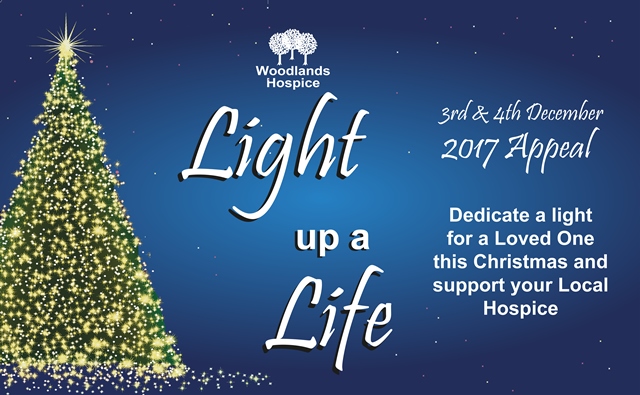 The Woodlands Light Up A Life Appeal gives families the opportunity to celebrate a loved one by dedicating a light on one of our Christmas Trees in December. Christmas is often a difficult time of year after losing a loved one, and our Light Up a Life Appeal aims to help those people in a special way. The Tree is a sight to behold when it is adorned with so many lights, knowing each one has been dedicated to someone special. In addition to the Tree, we hold our Light Up a Life services at the Hospice and at St Andrew’s Church, Maghull, to give families the opportunity to see the Tree and remember their loved ones. Families also receive a special card with the name of the person they’ve dedicated their light to and their name will appear in our ‘Book of Life’ which is available to view at the services and at the Hospice throughout the year.

Anna and her family have agreed to take part in this years’ service and all of the staff at the Hospice are honoured that her three daughters, Beth, Ally and Tori will be switching on our lights this year. Anna said,

“The girls were thrilled to be asked to switch on the Christmas Lights and I think it will be lovely for them to honour Mark and be part of the Light Up a Life service. By dedicating a light to someone special, you’ll be helping Woodlands Hospice to continue providing the care they do for their patients and their families, which we found so invaluable when we needed it most.”